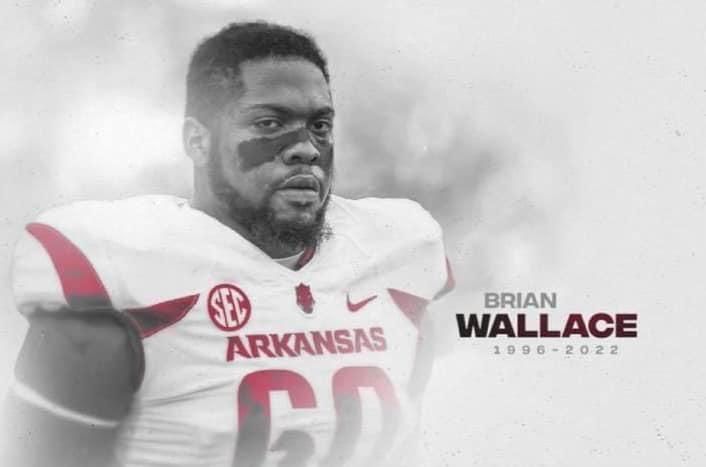 In Memory of Brian Wallace

We are beyond shocked & heartbroken by the sudden passing of Brian Wallace. We had the great pleasure of being with Brian throughout his journey in the game of football from youth to NFL/XFL. We saw him grow from a curious big boy learning the game into a towering man who dominated his opponents.

As Brian progressed into a dominant high school player at CBC & he began to receive attention from all the major Power 5 programs, everyone from Alabama on down. He was selected to play in the Army All-American Bowl. With all of these major accomplishments at a young age, one thing remained constant, Brian remained humble and never let it get to his head. He didn’t brag or slow down, he just worked.

He then made the decision to play for the Arkansas Razorbacks. After numerous obstacles & coaching changes Brian persevered and became a dominant SEC starter. Entering his senior year he worked harder than ever before transforming his body into that of a professional player. He then moved on to play in the NFL & XFL living his dream as a pro.

Brian’s journey in the game was mirrored by a person off the field who had a heart of gold who cared and loved many. Upon retiring from the game he was eager to get back to his roots and help train kids. He was hitting his stride as an OL coach with us at Elite. He will be greatly missed by the entire OL coach & player family.

While we are in shock from his passing we are grateful for our time with Brian and the Wallace Family. Elite is a better place and program because of Brian Wallace.

Throughout Brian’s successful career there was one constant; the absolute love and support from his mother & father. Brian was their pride & joy. Their love for Brian was undeniably evident. Brian hit the jackpot by getting Leslie and Brian as his parents. I can’t think of a better combination between the three of them!

We are all hurting with the loss of Brian. We ask that you please pray for peace and comfort for all of Brian’s family and friends.